Plant a tree in memory of Jean
An environmentally-friendly option 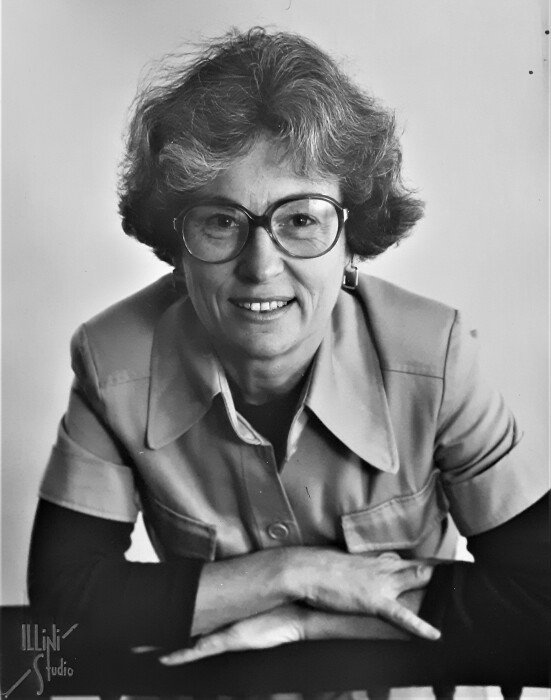 Jean Henderson Osborn, a well-respected educator and textbook author, passed away at her home in Champaign on June 20 at age 91.

Jean was born in Stockton, California, in 1930. Her mother, Ann Shaw Henderson, died shortly after childbirth. Her father, Roy Henderson, worked as a traveling salesperson, so Jean led a somewhat itinerant life for her first nine years, before moving in permanently with her aunt and uncle, Ivanetta and Bryce Swartfager, in Santa Rosa, California.

At Santa Rosa High School, Jean joined the school orchestra as a cellist and worked at the local newspaper and public library. In 1948, she enrolled at Stanford University. She met her future husband, mathematics graduate student Howard Osborn, in the university orchestra, where he played the viola; they were married in 1951.

Jean gave birth to the family’s first child, Mark, the next year and graduated from Stanford with a BA in history in 1953. The growing family moved later that year to the University of Chicago, where Steve was born, and then back to Berkeley, California, where both Howard and Jean taught, he at the university and she in a preschool. The family finally settled in Champaign-Urbana in 1956, when the University of Illinois hired Howard as an assistant professor of mathematics.

While pursuing a master’s degree in education at the U of I, Jean helped establish a preschool program at Colonel Wolfe School in Champaign that used Direct Instruction (DI) curriculum written by Jean and her colleagues to teach reading, language and arithmetic to disadvantaged children, with great success. The family’s third child, Adrienne, arrived after Jean completed her master’s degree, and was followed five years later by Emily.

In the late 1960s, the U.S. Department of Education included the DI curriculum in Project Follow Through, a massive federal effort to determine which programs were most effective for educating disadvantaged children in kindergarten to third grade. DI programs were implemented at schools nationwide, and Jean co-wrote DI language textbooks for grades K-3, versions of which are still in print. She also became a project manager for Follow Through, flying to schools across the country to support their DI programs.

After Follow Through concluded in the mid-70s, Jean became a researcher at the U of I’s Center for the Study of Reading, eventually serving as the center’s associate director. She later helped administer the Texas Reading Initiative for Governor George Bush. When Bush became President, his administration appointed Jean to the advisory board for the National Institute for Literacy.

Throughout her working years, Jean managed to balance the demands and rewards of her career with the responsibilities and joys of her family. In their welcoming home in Champaign, Jean and Howard hosted countless parties, which often featured live chamber music. They also traveled widely to visit friends and family and to see the world. In retirement, Jean took up the cello again and played with the Parkland Orchestra and a local string quartet. She served on the board for the Champaign-Urbana Symphony, and she and Howard supported Krannert Center. In 2005, Jean was diagnosed with Parkinson’s disease. As the disease advanced, she appreciated all the people who assisted her and made it possible for her to stay in her home.

Through her long and rich life, Jean stood at the center of a vibrant, broad circle of family and friends. She was a generous and wise person who inspired others with her warm wit, spirited sense of humor and down-to-earth practicality. Her unbounded love for her children and grandchildren did not exempt them from receiving, on occasion, clear-eyed directives and firm advice. Even in her waning days, Jean continued to think and worry about others, and to ask after the well-being of people she had known throughout her life.

Jean was preceded in death by Howard in 2019. She leaves behind four children and their spouses (Mark Osborn and Irene Serrano; Steve Osborn and Renata Breth; Adrienne and John Winner; Emily Osborn and Steve Poston) and six grandchildren: Sam, Hannah, Mackenzie, Bryce, Elliot and Abigail.

The family is planning a private memorial service. Donations in Jean’s memory can be made to Krannert Center or the Champaign-Urbana Symphony.

Plant a tree in memory of Jean by clicking here.
To send flowers to Jean's family, please visit our floral store.

Plant a tree in memory of Jean
An environmentally-friendly option

Plant a tree in memory of Jean

4 trees planted in memory of Jean

Jean I will miss your kindness! You and Howard were such loving and caring souls. Bonnie is waiting to meet with you in the ethers over Mt. Hood and the Columbia Gorge! With much Love!
Bonnie Armbruster and Harry VanderVelde

I was one of many who had the pleasure of connecting with Jean, in my case through years of chamber music concerts with friends at their home. I left the area in 2009, but thought of her fondly, and know hers was a life well-lived.

A Memorial Tree was planted for Jean Henderson Osborn

Plant a tree in memory of Jean