Plant a tree in memory of Olive
An environmentally-friendly option 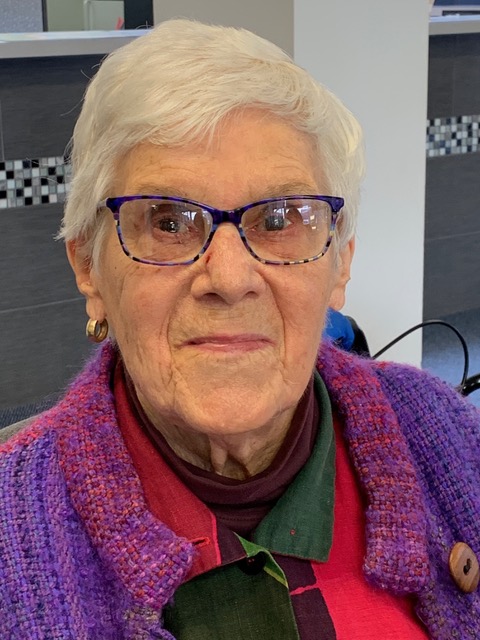 Death came for Olive Clark in her sleep, the morning of March 24, 2021. As a young child, she asked her mother, “Do you think I could live to the year 2000?”  Olive lived to be 100 years, seven months, 28 days. Olive was born in Passaic, NJ, July 27, 1920, the month before US women (effectively only white ones) got the constitutional right to vote nationally.  Her mother was Helena Meyer Brewster, a child of Irish and German immigrants.  Her father, Arthur P Brewster, grew up on a farm in downstate NY. As a child, she was fiercely competitive at marbles, loved soccer, roller and ice skating, field hockey, and standing on her street’s bridge over railroad tracks.  She would stand on the outside of the railing to take full advantage of the steam from the engine passing below. A child of the Great Depression, her family did more than okay, because her father was a machinist and superintendent in a huge handkerchief factory and people still needed handkerchiefs.  Tramps would find their way to the Brewster back door when it became known that her mother would give them food.

Berkeley Secretarial School in New York City gave her typing and stenographic dictation skills that carried her through work in an amazing range of companies over the years: the military, stained glass, AMF the bowling machine company, law, pharmaceuticals, and the UI.  Her work at Hoffman LaRoche offered free night college classes, starting her on a path to earn a BA from Cedar Crest. Olive greatly enjoyed art classes in painting and drawing.

During WW II she once woke up in a maternity ward in Greencastle, IN and she hadn’t been pregnant. She’d survived a car crash, only because she’d been lying down in the front seat of the car her husband, George R Cocker, was driving. They were headed, from where he was stationed in Texas, back to Langley Field, VA, in a snowstorm.  He ran under the back of a semitrailer truck in an era before trailer safety bars.] She was married, and  widowed, three times: first to George R Cocker, Jr, 2nd to Ralph Schultz, lastly to Robert G. Clark.

After her second husband died, Olive moved to Urbana to be near her daughter and two grandkids.  At the age of 67, she met her third husband, cross country skiing, when they were both on an Elderhostel trip in Taos, NM. Robert G. Clark, a Unitarian, moved from Washington state to Urbana to marry Olive. Olive had been an active Presbyterian until then. They joined the Urbana UU church and became enthusiastic volunteers, from Hospice to balloon and Urbana Sweet Corn Festivals. Olive even typed up the minister’s sermons (the better to understand him). The two loved educational trips with Elderhostel/Road Scholar. Their travel ranged from the US to Bali, Machu Picchu, Mexico, France, and Italy.

For fourteen years Olive enjoyed making new friends and living in an independent apartment at Clark Lindsey Village.  The month after her 100thth birthday, in the midst of the pandemic, she moved to skilled care in one of CLV’s Greenhouse Homes. Heartfelt thanks to supportive friends, aides from Meeting Your Needs, the staff at Clark Lindsey Village and West Greenhouse Home, and therapists at Studio Helix who helped her keep her life interesting and then supported her as her body and mind began to fail her. Olive was very ready to complete her life’s journey.

Olive’s remainashess  will be scattered.  Memories of Olive can be shared at www.renner-wikoffchapel.com.  Those wishing to honor Olive are encouraged to donate to:  Illinois  Public Media, UI Foundation, 1305 W Green, Urbana, 61801; Unitarian Church, 309 W Green, Urbana, 61801; or the American Civil Liberties Union, www.action.aclu.org/give/tribute-aclu-illinois

Plant a tree in memory of Olive by clicking here.
To send flowers to Olive's family, please visit our floral store.

Plant a tree in memory of Olive
An environmentally-friendly option

Plant a tree in memory of Olive

1 tree planted in memory of Olive

We think of Olive every spring when the (replanted) scraps of plowed-up daffodil bulbs that she and Bob gave to us burst into a field of glorious splendor at the corner of University Avenue and New Street.

An obituary rarely celebrates such a rich, contributive life! I read with respect and could see continuation in you members of her following generations.

I'm thinking of you with sympathy and gratitude.

A Memorial Tree was planted for Olive B. Clark

Plant a tree in memory of Olive